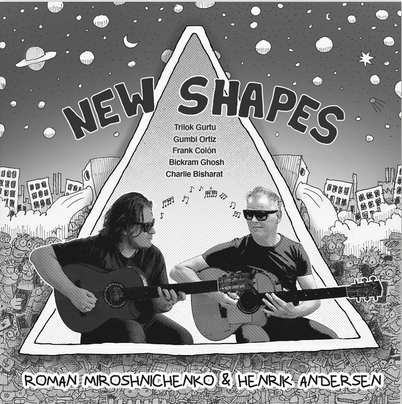 A remix of "Russian Mountains"

A powerful guitarist who has led more than ten albums so far, Roman Miroshnichenko can be considered one of the pacesetters in today’s fusion scene. He has performed with such greats as Larry Coryell, Steve Vai, Paul Wertico, Bunny Brunel and Al DiMeola. Born and raised in the Ukraine, he started out exploring blues and rock before deciding to become a jazz guitarist, one who is always looking for a new challenge.

"New Shapes" is just that for it shows that Miroshnichenko is just as impressive on acoustic guitar as he is on electric. On New Shapes, Roman Miroshnichenko teams up with fellow guitarist Henrik Andersen.

Born and raised in Copenhagen,  Andersen is not only a top-notch guitarist but a vocal percussionist who can sing rapid lines. Trilok Gurtu, a famous Indian percussionist who worked with John McLaughlin and Oregon, was one of his teachers and is a special guest on New Shapes.

The project also includes appearances by percussionists Bickram Ghosh, Frank Colon, and Gumbi Ortiz plus violinist Charlie Bisharat.
Sticking to nylon and steel string acoustic guitars, Miroshnichenko and Andersen constantly challenge each other throughout New Shapes while exploring a wide variety of styles. Both are capable of lightning-fast runs and those are used for punctuation throughout the set without losing the essence of the melodies, moods, and rhythms.

The opener, “Russian Mountains,” makes it clear that the guitarists are both virtuosos but ones who always keep the melody in mind. This is one of several pieces in which Andersen’s rhythmic scatting (which interacts closely with the percussionists) has a memorable spot.

On “Playground” the guitarists trade off playful ideas throughout and utilize a childlike theme that fits the piece’s title.
“Flying Dragon” has a particularly catchy melody and a fairly simple structure over which the guitarists create some miraculous lines during their solos.

A moody rhythmic pattern is the basis of “Corona Funk,” a performance that builds up in tension and passion quite effectively.

“Bodhran’s Magic” is a jazz waltz with an Indian feel that features violinist Bisharat trading off with Miroshnichenko.

gives them an opportunity to play Brazilian samba in 7/8.

New Shapes is filled with variety and excitement.

It features Roman Miroshnichenko and

Henrik Andersen at their most inspired.

Scott Yanow, jazz journalist/historian and author of 11 books including The Great Jazz Guitarists and Jazz On Record 1917-76 /

I am working on new dance show together with Simona Zanini (IT) - We found a common urge to tell the story about our artistic journey and demonstrate some of the indian classical techniques. But in a new fresh personal way. Out of the box! 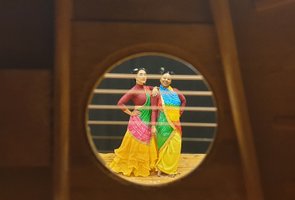 I have actually been inside a MR scanner visualizing KONNAKOL at Århus university hospital (DK) some years ago. The brain doctors involved in that experiment called me, to my big surprice, a "master of meditation". I am really just a curious student of what I call “music” and so lucky to be proffesional.

What I DO know is that Konnakol is as important to me as my morning coffee. I need a little dosis every day to make my brain wake up.

I was the first person in the world to post KONNAKOL videos back in 1996 on a website. When YOUTUBE arrived, almost 10 years later, I reposted my videos there.  I felt like a "half musician"  until 1993 where I found "IT"  KONNAKOL. But I needed to translate & digest this information because I saw a much larger perspective in KONNAKOL.  Today, so many years after my mission started, you can find thousands of KONNAKOL videos online and a new generation of musicians shows their skills and creates amazing konnakol full of mathematical ideas!

But I think there is a much deeper perspective to this old south Indian rhythm langauge than all of that, music is just a by-product.

We all pretty much know how to eat well and work out. Perhaps we can cook our own food & run a marathon. But how do wee feed and maintain our minds?
I think a lot of people could benefit from learning Konnakol. Both musicians and specially non-musicians. Singing math rhythms is meditation, science & art.

I wrote this guitar music to educate myself and break all habits in search of something new to play! I was - like many guitarists - trapped in a mindless routine and could not develop new ideas. So I decided to spend two years researching, composing and mapping all my theoretic ideas, techniques & inspirations in such a way that each composition represents a study, a vehicle to explore new sonic territory. "WayToFly OnMyGuitar"  is my complete study of Intervals, harmony and rhythm. In a way its also a portrait of my career, a musical journey through four decades and most continents.              Both WTF + OMG variations are released as sheet music + guitar tabulature and avaible in my webshop.

You can listen to some of the music here on youtube

The 24 variations covers a lot of different styles inspired by jazz, indian music, heavy metal, techno and different kind of classical music. In this final variation ( nr 24) I return to my deep admiration of J.S.Bachs partitas. The dialog between bass and the melody creates new colourfull harmonies.

In fact Bach inspired me to this whole project. I realized that I loved his music too much. Its perfect! So I had to stop playing it and move on with my own musical journey by constant developing new ideas and create a school for myself. 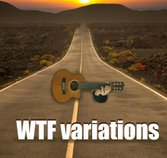 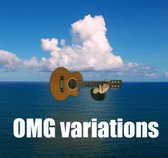